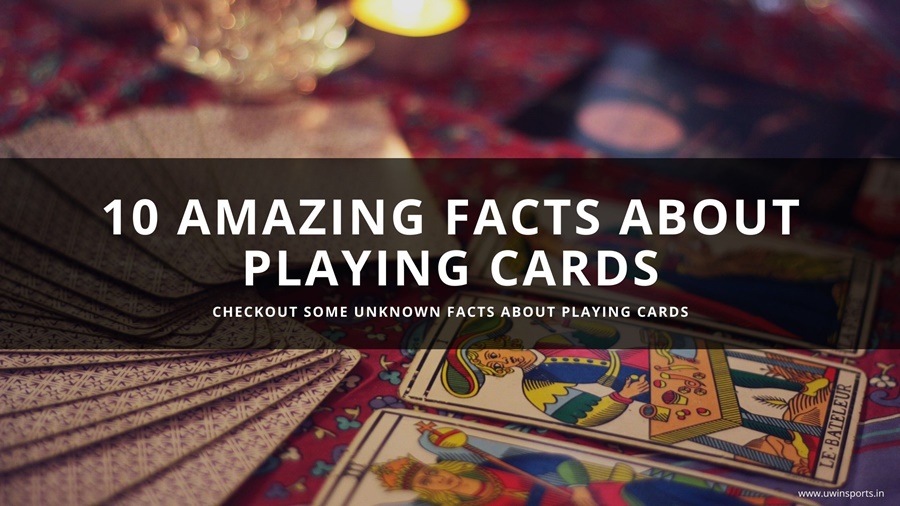 If you love playing any card games, then a deck of playing cards has to be among your favorite things. But have you ever wondered just about the cards and not the different games you can play with them? Well, we are sure most of you haven’t.

So let’s take a closer look at the cards with Uwin Sports and try to find answers like what they are, their origin and why they are so popular among people from all age groups. Stick to the end to find out some interesting facts about playing cards, one of the most popular games in history.

Like 52 months in a calendar, the deck of playing cards has 52 cards. Some studies also show that the cards’ color black and red represent day and night and that the four different suits are for the four seasons.

Even more interesting is that thirteen cards in one suit are the same as the number of lunar cycles in a single year. So the twelve months of a year is represented by the twelve court cards. Mind-Boggling, right?

Cards were invented in quite a stunning location

It is also believed that the first printed cards originated from China too. According to experts, the card game then slowly spread its roots through India, Egypt and Persia before reaching Europe, where it got its various variations.

The decks of playing cards in the casinos of Las Vegas don’t even last for 12 hours before being sold or discarded. It all depends on how busy the table has been and how long a deck has been in play. It also depends on whether the shuffling has been done by a machine or manually.

If you visit a Casino during busy hours, a deck of cards may not even last for 1 hour. It is because the decks are changed at such short intervals to stop any distinguishing marks on the cards like scuffs and bends.

The world’s oldest and rarest full deck of cards is on display at New York’s The Metropolitan Museum of Art. It is a hand-printed tarot deck made in the Netherlands during the 15th Century. The fantastic condition of the deck suggests that it was hardly used.

A collector bought this deck in the 1970’s for $2,800 and sold it to MET for $143,000. So it is after researching its history for about five years. There are other century-old decks of cards kept at different institutions with their database on cards. One such institution is Yale University.

Any imperfections in a deck of playing cards can attract much attention from the eagle-eyes players and even try to cheat their way to win big. So to prevent any such incidents, Casino Cards require a lot of security at all times.

The cards usually have significant symbols and characters to catch any suspicious activity on CCTV cameras. The dealers and pit-bosses also need to sign the cards before playing. Every card is accounted for when the deck is finally retired and sold off with intentional damages, so they don’t find their way back into the casino.

Some decks of cards have recognizable characters

You may find some familiar characters on a regular deck of 52 French cards created in the 16th Century. It is because some of them are inspired by famous figures. If you take a closer look, you might just Julius Caesar, Alexander the Great, Pallas Athena as the king and queen of some suits. Pretty impressive, right?

There is something more to playing cards than just games

During World War II, the US government got quite creative with cards. They worked with a prominent card company to make secret card decks for the American POWS (prisoners of war). These cards could be peeled off when wet and reveal maps with escape routes. Who would have thought that cards could be used as secret maps as well?

The US has some of the most famous decks of cards

It is a fact that most iconic decks of cards are made by the US brand called Bicycle. The same company provided the US POWs with secret cards containing escape routes.

The cards of this company hold a special place in popular culture as the American soldiers used the Ace of Spades of these cards to scare off Vietnamese Cong members during the Vietnam War. You will find these cards in most casinos and magic shows now.

One manufacturer dominates the whole market

The biggest manufacturer in the world is The United States Playing Card Company. Famous cards like Aviator, Tally-Ho, Bee, and the famous Bicycle cards are made by the USPCC. It is also the go-to choice for card decks of many US-based Casinos. A German company called Cartamundi also claims to be one of the largest manufacturers of cards in the world.

For security reasons, the cards in Casinos are made of plastic

When you go to a casino, you might feel that the cards there are different from the regular decks of cards. It is because they are made of plastic. One reason is that plastic cards are easier to handle while playing games like Poker as they last a little longer. In addition, players cannot mark the cards and cheat if they play with plastic cards.

1. What is the earliest reference to playing cards?

The earliest reference of it was in the Chinese literature during 10th century.

2. What is the most popular card design?

The most popular card deck is the International deck of 52, divided into four different suits and contains 13 ranks.

3. How long do playing cards last?

Any deck of cards will wear out within a month.