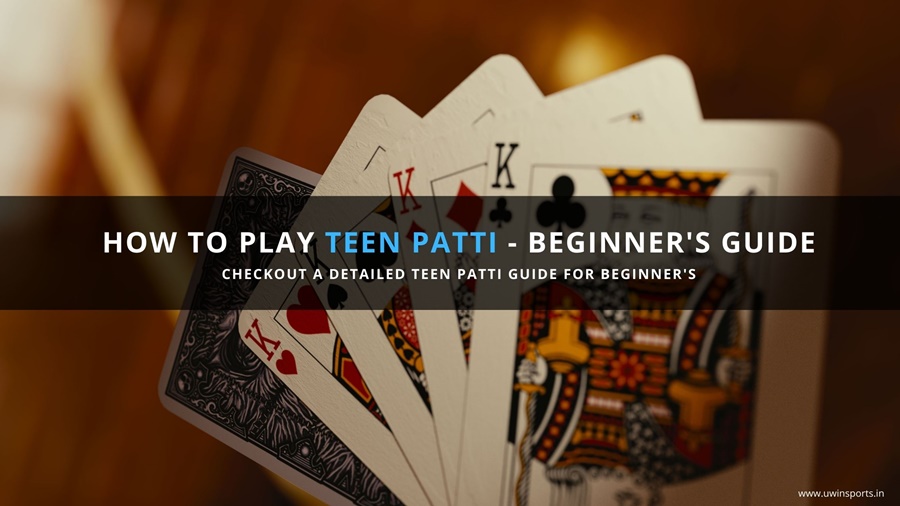 How to play Teen Patti Online?

A player would need a minimum of three and a maximum of six players to play Teen Patti. The game is played using a traditional 52 cards deck. Before starting the game, each player must deposit their share of the boot amount into the pot. The minimum stake amount decided by the players is known as the boot amount.

Once the pot is filled, the cards are dealt facing down. So you don’t know your cards until you flip and look into them. You can play the game either blind or seen. If you play seen, you can flip your cards and see them.

Your main aim should be to win the entire pot by either having the highest hand at the end of the round or not folding your hand.

Learning to play Teen Patti online is simple and easy. To win a game of Teen Patti, you will need both skills and some luck. But before jumping straight into the game, it is crucial to learn the various sequences of Teen Patti.

Trio: It is the highest sequence you can make with three cards of similar rank. Three Aces make the highest Trio, and three 2s make the lowest.

Pure sequence: A pure sequence is also known as straight flush. You need three cards from the same suit making a sequence to have a pure sequence. A, 2, 3 makes the best cards, and 4, 3, 2 make the most miniature cards.

Sequence: A straight hand consisting of three successive cards, not necessarily from the same suit, makes a sequence. A, 2, 3 makes the best sequence, and 4, 3, 2 makes the worst sequence.

Colour:  It is a colour sequence with three cards from the same suit. In case of a tie, the ranks of the cards will be compared. For example, ace, King, and Jack are the highest while five, three, and two are the lowest.

Pair: You can make pairs of cards from the same rank. E.g. two Kings from different suits. If there is a tie between the players with a pair, the player with a higher ranking card wins. The highest pair is made using two Aces, and the lowest is two 2s.

High Card: A hand that doesn’t have three cards from the same suit or in sequence and no two cards with the same value is a High Card. If there are multiple high cards in your hand, then you win. A-K-J of any suits is the best High Cards and 5-3-2 the worst.

There aren’t a lot of rules that you will have to remember to play and win Teen Patti. The rules of the Teen Patti game are easy to understand and follow. But every player needs to know the rules before making any investment in the game.

A dealer must deal with the cards while playing Teen Patti. The player on the dealer’s left side places the first bet, and the game goes in counter-clockwise.

You, as a player, can play either blind or by seeing your cards. You can choose this only after the stake money is collected from all the players.

To start the game of Teen Patti, each player must place their first bet. Once the bets are in place, the dealer distributes three cards to each player.

It is one of the most exciting variations of the Teen Patti game. In this variation, the dealer distributes three cards, like always, and then draws three other cards with their face-up on the table. The first is the card, the second is the colour, and the third is the bust.

In this Teen Patti variation, the dealer deals four cards instead of three to all the players. Now the players can look at all the cards and choose the best three cards according to their choice. Once they have selected their three cards, they will have to discard the fourth one.

This one is a popular variant of Teen Patti, probably because of the catchy name. The dealer deals with three cards each to all the players. The twist in this variation is that numbers seven and four and the aces and kings are all Jokers.

In this variation of Teen Patti, each player is given three cards, and they have the make the trio number as close to 555 using those three cards. The closest number can either be higher or lower. The trio numbers the players make using their cards are divided by 555. The player whose hand has the lowest difference wins the game.

The rules of this variation are precisely the same as the traditional Teen Patti game. However, there is just one difference: the boot value is four times more than the average boot value.

The moves of the Teen Patti game are as follows:

Blind: Playing blind means you cannot check the cards you are dealt before placing your bets. You have to be confident that the cards dealt with you make a great sequence and take the risk to play blind.

Playing Seen: This is when you place the bet or pack after seeing the strengths of the cards dealt with you.

Tie: It will be a tie if the last two players pack the game and don’t show. The amount in the pot will either be returned or divided equally among both the players.

Show: The following rules apply if the last two players decide to show:

(b) If both the players are playing on seen, then one has to double the stake amount.

(c) If a player is playing blind, he cannot access the show.

Teen Patti is considered one of the best casino games in India. It is one of the most accessible card games to learn and place bets at a casino, even if you are a newbie. Although you need to be a little lucky to play Teen Patti online, you can put in all the skills you have while making decisions on your hand to walk away as the winner of the game.

1. Which card is the highest in the game Teen Patti?

The three ace cards are the highest in the Teen Patti game.

2. Which card is the lowest in the game Teen Patti?

The three twos are the lowest trio cards.

3. Which color card is highest in Teen Patti?

When the suit ranking part is applied, the popular conventions include:
In alphabetical order: clubs (lowest), and then the diamonds, hearts, and spades (highest).