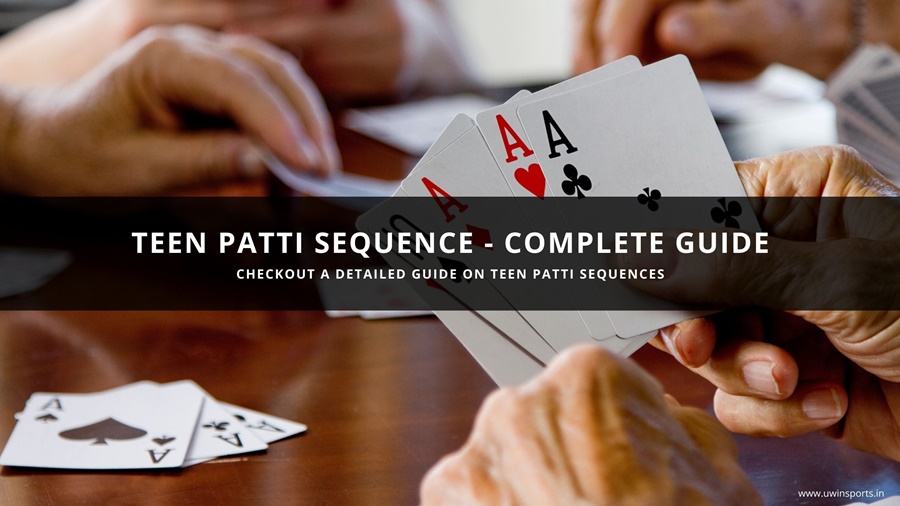 Teen Patti is the most famous card game in India. The game originated in India because it is so popular in the country. You can play Teen Patti in real life with your friends and family members and also on online casino websites.

Teen Patti as the name suggests is played with three cards only and has some similarities to Poker. However, it would help to make different sequences using the three cards dealt with you in this card game. So it is important to know the different Teen Patti sequences if you want to play the game and win some real money.

Without knowing the rules of Teen Patti, there is no point in learning about the sequences that you can make in the game. So, to make things simpler for you to understand, here are the rules that you need to remember while playing Teen Patti:

Here is the complete list of different sequences that you make in the Teen Patti game using your three cards:

As mentioned above, a Trail or Trio is the highest sequence you can make in the Teen Patti game. So if you get a Trio, then be sure to win that round of the game, as no other hand sequence can beat it. But if another player also has a Trio, then the hand with the higher Trio wins. The highest Trio sequence is A-A-A. Nothing can beat that, so know that you are winning the game if you are lucky to have it.

How to decide which sequence wins in case of a tie?

Having a tie between two sequences in the game of Teen Patti is quite common. What you must consider in such a situation is the value of the sequence order. Ace is always considered the highest card, and the order goes down, as usual.

In cases of a tie regarding sequences, it comes down to the ranks of the cards. Let’s make it clear with an example.

Let’s say you and another player have A-A-5 and A-A-9, respectively. Here, both of you have a pair of aces, but since your opponent’s third card is 9, they will win because the value of their card is more.

Now that you are clear about the rules and the various sequences of the Teen Patti game, you can jump into an online casino website and play the game to earn some extra money. Always remember to make any of the sequences mentioned above while playing the Teen Patti game to stand a chance at winning the game.

1. Which card is highest in the game Teen Patti?

The three ace cards are the highest in Teen Patti game.

2. Which card is the lowest in the game Teen Patti?

The three twos are the lowest trio cards.

3. Which color card is highest in Teen Patti?

When the suit ranking part is applied, the popular conventions include: In alphabetical order: clubs (lowest), and then the diamonds, hearts, and spades (highest).