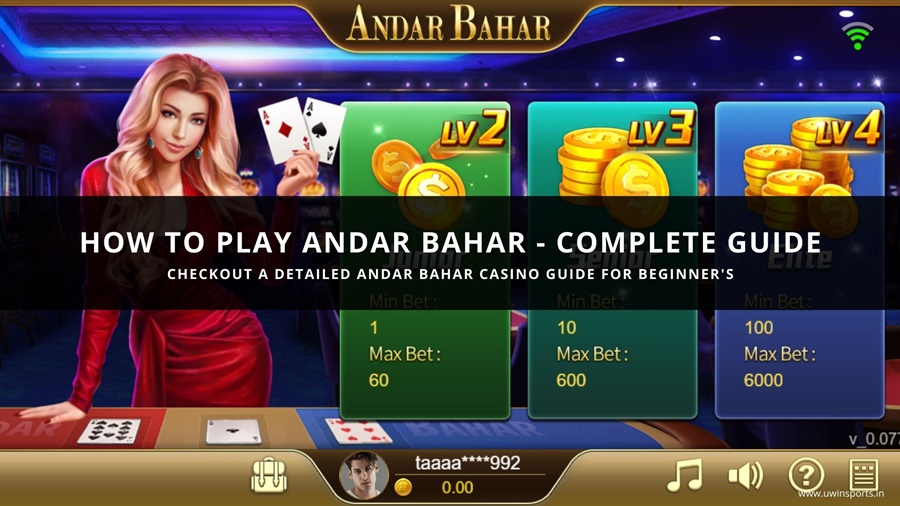 How to Play Andar Bahar? A Complete Guide

Andar Bahar is a well-known Indian card game. Also known as Katti or Mangatha, it is a betting game that was historically played without real money. Andar Bahar is a newer card game when compared to other card games. It’s quick and straightforward to learn, and there’s no limit to how many people may play.

While the game became popular in recent years, it has its trace back to Bangalore at some point in the past. Unfortunately, records are imprecise, and no particular date exists, although it is thought to have begun shortly after playing cards came to India.

Although playing cards originated in China about 1000 CE, they did not appear in India until 1625. Andar Bahar would have evolved later if many of the earliest card games in India utilized round cards with ten suits and twelve cards to each suit. The action is described in the game’s name. Andar Bahar translates to ‘inside’ and ‘outside,’ yet it is most commonly explained as ‘left’ and ‘right.’

When a player plays Andar Bahar, the outcome is determined mainly by chance, with a bit of informed guesswork thrown in for good measure. For rapid-fire gaming, a single deck of 52 cards works. But, to keep things simple, the game’s odds of winning are 50/50.

Players then select one of two sides of the table: Andar (the left side) or Bahar (the right side). The goal is to anticipate which side an identically numbered card to the chosen card will emerge after the cards are sliced and dealt. It’s just that simple!

Although Andar Bahar is a basic card game, there are specific general rules and gameplay elements that one should be familiar with before they begin. These can differ slightly across online casinos, newer alternatives with additional features, and live casinos. However, the conventional Andar Bahar guidelines are:

The dealer cut, for example, displays a card value of 5. Next, they make a wager on Andar. After that, cards are given to both betting positions. A card with the same value of 5 is handed to the Andar position. It signifies that their original wager was successful. If the card appears in Bahar, they can choose incorrectly and lose the Andar Bahar bet.

One advantage of playing Andar Bahar is that there is no problematic vocabulary to learn and memorize. It’s a simple game that everyone of any age may enjoy. Players need to memorize two things:

There is usually a minimum wager in Andar Bahar game online that may be put to join, which can be as low as ten dollars. There will also be a maximum sum of up to $10,000. One can choose a game or a live casino table with betting limits appropriate for their budget and personal preferences.

Again, many varieties of Andar Bahar may be offered, particularly in live casinos or video versions. However, once the lead card appears, the players will be encouraged to place their bets. They will get a few seconds to choose between Andar and Bahar and place their bet.

Specific Andar Bahar games may also enable fascinating additional side bets. For example, players may also be allowed to gamble against the card that the dealer discards. These side bets might involve estimating the lead card’s suit or whether it will be below or over a specified number. Bets are made by the players clicking on the chip amount appearing on the screen, then on the card.

Onscreen Andar Bahar’s instructions on wagering limits, placing bets, and any extra bets that can also be at the table maximum limit are always available.

When playing Andar Bahar, the payments are as per the player’s correct prediction of the matching card number. However, whether the significant card was a black or red suit given to Andar or Bahar is generally a factor.

If the matching card appears on a similar side to the significant dealing card, participants will earn a 90% payment. If the card reflects on the other side, the players will earn a 100% reward.

Andar Bahar is a fast-paced card game that is incredibly entertaining to play. However, there aren’t many strategies that players may employ to improve their odds of winning. Unlike Teen Patti, the outcome of Andar Bahar is mainly determined by good fortune. There are no strategy manuals that may guarantee to raise the odds or to promise a payoff, as with most games of chance.

If players look forward to improving their winning chances, they should follow some fundamental guidelines. Before they begin playing, they must learn the game, understand how dealing and betting function and practise too. Set a specified budget before playing for real money.

Winning side bets is better to make money than winning the primary bet. It is determined by the number of distinct side bets available and the pay rates for each.

On the other hand, winning a side bet has lower odds than winning the primary bet. A player’s ability to put side bets is further complicated because they must engage in the primary bet to place side bets. Using this information, raise wagers on the primary bet only up to the fourth play. With each card played, the odds get better. Never bet more money on the main game than wagered on the side.

These techniques do not improve the chances of winning; instead, they help keep the spiral of sunk costs in place.

Recognize that the game usually finishes on the first side played rather than the reverse. As such, if the player wagers on every round, it is best to bet light on even plays and heavy on odd plays.

Most games are over before the 13th card is dealt. It tells the player the maximum duration a game is expected to last in games with timer limitations to betting. Depending on the table, timers are often set to 30 seconds or 15 seconds. Thus a game will last 6.5 or 3.75 minutes. Playing for the sake of winning is not as much fun as playing for having fun.

The Andar Bahar game is popular among Indian players and has become a popular internet game. Many people like the thrill of playing without cash, for free, or with virtual money.  However, it is also true that many casino game players like the excitement of winning. Then, place the game bets and relax. Whichever choice the player selects, Andar Bahar is a thrilling social game that never fails to delight!

1. Is it permissible to play Andar Bahar?

It is, indeed. There are no specific laws that prohibit the playing of Andar Bahar. However, one should select a secure game regulated by international privacy and data protection standards.

2. How can a player succeed at Andar Bahar?

Because Andar Bahar is a card game of chance, victory is primarily determined by chance. As a result, it’s an easy and enjoyable game to play. The player, however, is prepared by making sure they understand the rules and betting.

3. How can a player get a cheat code for Andar Bahar?

A player can’t get away with it in Andar Bahar. On the internet, a player may come across various frauds and even tools that promise a win. It’s simply not true. It’s an entirely random card game with no known methods or talents to boost their chances. In any case, it’s best to play Andar Bahar without cheating.