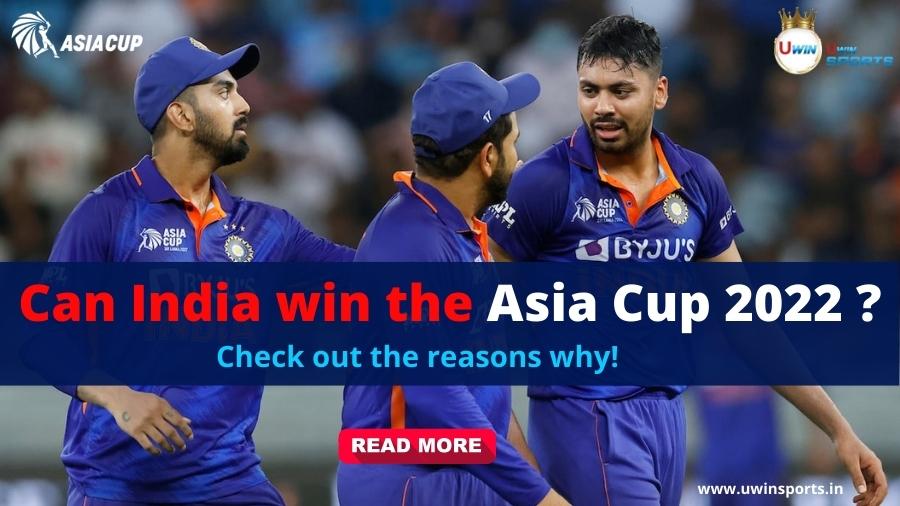 Can India win the Asia Cup? Reasons why they can!

India, the defending Asia Cup champions, will be the favourites to win the competition this time around. There are plenty of naysayers as well as fans who hope that the team will win the prestigious title for the eighth time. Can India win the Asia Cup? Let’s look at the reasons why they can.

Outside of ICC-organized events, Asia Cup is the largest multi-team tournament in international cricket. It is also the world’s only continental cricket tournament. Long before they became a global superpower, the Indian team began to dominate the event, as evidenced by their appearance in 10 of the tournament’s 14 finals. India have participated in 13 seasons, but have skipped one edition.

Asia Cup has been conducted every other year since 2008, and from 2016 onwards, it rotates between ODIs and T20Is depending on which big-ticket tournament is coming up. This year, for example, it will be staged in a T20 format to assist teams prepare for the T20 World Cup in Australia later this year. It will be played in one-day format next year, leading up to the ODI World Cup in India.

Sri Lanka is not in the best of form

India, as you know, has won seven of the 14 editions. The next best record is Sri Lanka’s who have taken five of them. But currently the team does not seem like a threat. Dushmantha Chameera pulled out of the competition due to injury, leaving Sri Lanka without a frontline speed bowling option. In the first game, they went with an inexperienced duo of Dilshan Madushanka and Matheesha Pathirana. Chamika Karunaratne has been pummelling as well and needs to tighten up. Bhanuka Rajapaksa was outstanding in the batting unit, despite his lack of IPL experience. The top order will need to improve its performance if Sri Lanka should be back with a chance.

Since Rohit Sharma took over as captain, India’s approach to T20 cricket has shifted. Even though the skipper himself can score maddeningly slowly as seen in India’s first two matches, the team’s credo is to score quick runs, and they have had decent outcomes. As a result, they would keep playing the same style of cricket.  Opponents will find it hard to beat since they are up against a squad that seemingly has no fear.

The middle-order hitters may build on a strong foundation provided by players like Rohit Sharma, KL Rahul, and Virat Kohli. The Mumbai-born player Suryakumar Yadav, who is now rated second in the ICC Men’s T20I rankings, is in excellent form. Similar to this, if Rishabh Pant, Dinesh Karthik, and Hardik Pandya get going, they can put a lot of pressure on the opponent. All of these players have been accustomed to playing such cricket as a result of the IPL. India has not lost a T20I series since the last T20 World Cup. This will undoubtedly help the team’s momentum and confidence heading into the Asia Cup.

Hardik Pandya and Ravindra Jadeja are two of India’s most valuable assets right now. The former is probably in the best form of his life now, having traded his instincts for bravado for cricket smarts, and the latter has always been a dependable, battle-hardened veteran. They can both hit it out of the park or dig in and play a mature knock if necessary. It provides India with a great deal of leeway in team selection. This is something that the other squad lacks, which gives Team India a significant edge.

Hardik has demonstrated his class and what he can accomplish when he is fit since the IPL. Whether bowling or batting, the Gujarat Titans captain has contributed enough to rank among the first names on the squad. On the other hand, you can’t form a squad without Jadeja’s name. He is the ideal all-rounder for India. As a left-hander, he provides India with several alternatives in the middle order because Jadeja can bat in any circumstance. He will undoubtedly bowl four overs for the squad, and there is no doubt that he is India’s top fielder.

You might wonder what’s so great with the Indian bowling, especially with no Bumrah to choke the batsmen or a Shami to freeze them at the death. But the fact is though Team India will undoubtedly miss Jasprit Bumrah and Mohammed Shami, with Arshdeep Singh in such good form, all other teams will be on high alert. Bhuvneshwar Kumar, the experienced pacer, will be on hand to advise him and Avesh Khan. Surprisingly, all three of the premium pacers have something unique to offer.

Arshdeep is a toe crusher, Avesh can smash the deck hard, and Bhuvneshwar can swing the ball both ways. As a result, three of them have distinct bowling techniques, which will only help India in the Asia Cup.

When it comes to spinners, Yuzvendra Chahal and Ravi Bishnoi may wreak havoc in the competition. They were fantastic in the Indian Premier League and have done well afterwards. The inclusion of Ravi Ashwin raised some eyebrows, but the off-spinner can be both dangerous and economical against left-handers. He has played in large events and can thus effectively train the new players.

Considering all these factors, it does seem quite likely that India will walk away with the Asia Cup for the eight time!

Bet on India with UWin Sports

While India wins on the field, you too can win in the comfort of your home if you place your Asia Cup bets with UWin. Not only does UWin offer the best cricket betting odds, they also offer the best ever bonuses and promotions seen in Indian cricket betting. Not just that, there’s a handy UWin app to make sure you carry all the exciting Asia Cup action with you wherever you go!