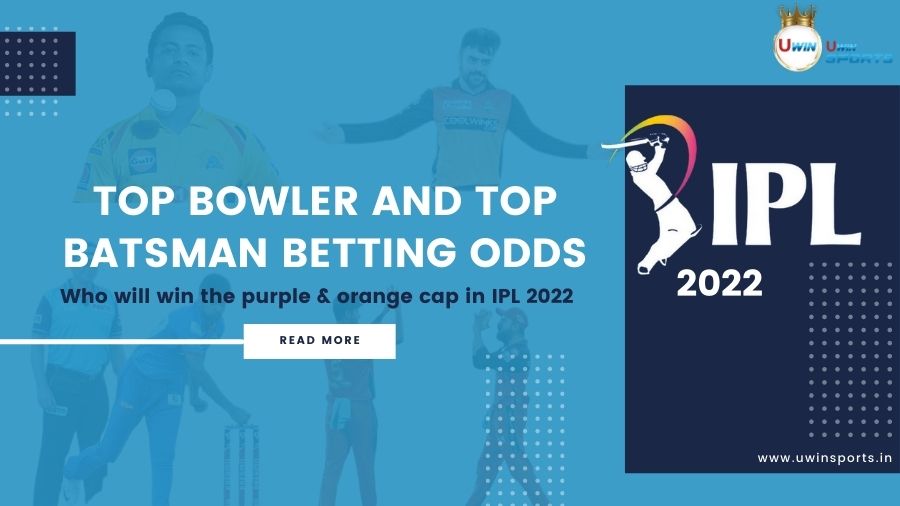 Cricket might not appeal to as large an audience as football or tennis does worldwide. However, in terms of sports betting, it ranks quite high. Especially so when it comes to IPL betting. This is because cricket, whether it is Twenty20, One Day, or Test Cricket, is near ideal for online betting fans. Cricket allows them to wager on a wide range of markets ranging from pure luck markets to ultimate cricket knowledge markets.

Of all the online IPL betting odds and IPL match predictions, the most popular are the top bowler and top batsman betting markets. So we’re going to look at the bowlers we believe will be the best in the IPL 2022 and win with the Purple Cap 2022. We’ll also examine the best batsman betting market, which is basically betting on the IPL 2022 season’s highest run scorer, who gets the Orange Cap.

You might have your favourite bowlers, but they may not necessarily be the best IPL betting options. We say this since it’s a long season and you don’t want to bet on the hottest favourites because it won’t provide you with the best returns in this two-month competition. So instead, we’ll look at some of the favourites as well as some of the lesser-known bowlers who are expected to take wickets. Harshal Patel, for example, won the IPL 2021 but was at odds of 50+ prior to the season.

Harshal has since made his international debut and will be one of the favourites again. He frequently bowls in the death overs. Following in the footsteps of Morne Morkel and Imran Tahir, Kagiso Rabada became the third South African to win the Purple Cap title in IPL 2020. We believe he’ll be a solid chance to be the top bowler in IPL 2022 as well. Watch out for Anrih Nortje too.

Deepak Chahar was the priciest bowler in the IPL 2022 Auction, and many may end up picking him as a bet to be the top bowler in the IPL 2022. We’ll avoid him, though, because he bowls 80 percent of his overs in the powerplay, which doesn’t usually equate to more wickets. He also commanded such a high price because of his ability to score runs with the bat.

Yuzvendra Chahal, one of the most consistent wicket-takers in IPL history, is one of the other Indian bowlers. He has a lot to prove, especially after being left out of India’s selection for the 2021 T20 World Cup and subsequently released by RCB for the IPL 2022. However, he’s an attacking bowling option who will also be a fantastic IPL betting pick.

IPL betting: How to pick the top bowler in 2022

The Purple Cap is awarded to the IPL bowler with the most wickets in any particular season. Only Bhuvi Kumar and Bravo have won it more than once, and only Kumar has won it in consecutive seasons (2016 and 2017).

Harshal Patel of RCB won it last year with 32 wickets in 15 games, the joint-highest record throughout 14 seasons of the IPL and the same number as Bravo in 2013.

The first three Purple Cap winners were left-handed, whereas the next 11 were right-handed. Only select players who are likely to be selected in every match. You can’t take wickets if you’re not in the game!

The IPL strike rate of a bowler is the best indicator of how frequently they take wickets in the IPL. However, their strike rate in T20s and T20Is is also important. Also, keep in mind that due to international obligations, Australian, South African, and West Indies bowlers may miss matches at the start of the IPL. You must consider all of these before placing your wagers on IPL betting sites.

Currently, Yuzvendra Chahal of the Rajasthan Royals and Umran Malik of the Sunrisers Hyderabad, for example, fit the exact profile of the player who could make it to the top list.

Before you decide which batsmen to back to be the leading run scorer in IPL 2022, we’d like to support you by providing some historical statistics on previous Orange Cap winners. CSK’s Ruturaj Gaikwad was the top scorer last season and will be one of the early favourites again. At the same time, former Punjab Kings skipper KL Rahul led the run scoring charts in IPL 2020.

Other recent victors include Kane Williamson, David Warner, and Virat Kohli. It should be noted that in the last seven seasons of the tournament, David Warner has won the Orange Cap three times, making him the only individual in history to have won the award three times. We’re sure you’d like to bet on him as well.

Among the newcomers is Ishan Kishan, who was the top buy at the IPL 2022 Auction, and it’s no coincidence that everyone wanted to spend huge money on him. He didn’t have the finest IPL 2021 season, scoring only 241 runs in ten games, and consistency isn’t his strong suit. However, teams believe he has developed and will be a good bet to be the IPL 2022 top run scorer as well.

IPL betting: How to pick the top batsman in 2022

It doesn’t take a brilliant mind to argue that the first-round choice should be an opening batsman. They have the longest duration of any player to score runs. Thus it makes sense to select regular, pricey top-order batters for the best chance of success.

Look for the team with the most dynamic batting lineup and identify the player whose duty in the group is to keep everything together. Jos Butler of the Rajasthan Royals, and K.L. Rahul of the Super Giants, for example, fit the exact profile of the player who could make it to the top of the list. You can avoid Rishabh Pant, Ishan Kishan, and MS Dhoni, as exciting as they are.

You can improve your online IPL betting payouts by using a trusted IPL betting site like UWin Sports to place your bets. With the best daily bonuses, loyalty bonuses, and other promotions on Uwin. Download our UWin betting app now!