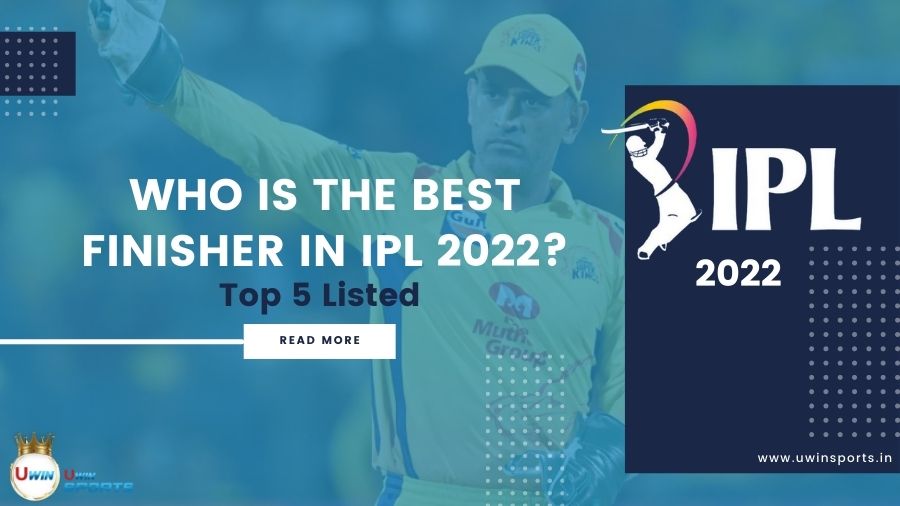 While it is true that openers play a massive role in T20 cricket, especially in the IPL, finishers have a pretty significant part to play. Their performance can quite literally change the tide of a game. Quality batsmen can change the very momentum of a match and help get their team over the finish line. So online cricket betting fans and IPL betting sites need to consider that the tide may turn when a finisher walks in. Case in point- we’ve seen some impressive finishes in Tata IPL 2022. But who’s been the best finisher in IPL 2022 till now? Here are the five best finishers in IPL this year.

The fact is the best hitters in IPL are usually top-order batsmen. They also usually walk away with the IPL Orange Cap and the highest strike rate in IPL. Moreover, since they come in early and bat for the majority of an innings, they get to face the most balls. The plot appears to be the same for IPL 2022. Currently, Rajasthan Royals opener Jos Butler leads the race with 588 runs from ten matches. Lucknow Super Giants captain KL Rahul is second with 451 runs from ten IPL 2022 matches. Another opener, Shikhar Dhawan, comes in third with 369 runs from the ten matches he’s played in.

Into this rather skewed mix comes the finisher. Here’s the thing – the best finisher in cricket does not necessarily have to be an opener. Finishers instead ensure that every team has a plethora of runs quickly and near the close of an innings. The best finishers in IPL don’t take long to unleash their batting prowess. That is exactly what is expected of them and something that their team needs. Depending on the situation, they usually bat at four, five, six, or even seven.

This season, Nicholas Pooran was slated to play finisher for Sunrisers Hyderabad (SRH). But surprisingly, it is South Africa’s Aiden Markram who has taken to the challenge like a duck to water. The aggressive hitter started his season with an undefeated 57 off 41 balls against the Rajasthan Royals (RR). He has gone on to play a few fantastic knocks after gaining confidence from the innings.

Markram hit 68* off 36 balls as SRH easily chased down 176 against the Kolkata Knight Riders (KKR). He ended the game by smashing Pat Cummins for four runs and two sixes. He was unbeaten on 41 off 27 deliveries in SRH’s subsequent encounter against the Punjab Kings (PBKS), as Hyderabad chased down 152 with seven wickets in hand. The Proteas hitter once again hit the game-winning runs, smashing Vaibhav Arora for four and six. His current batting average is 76.25. Do we need to say more?

We know this one seems a little peculiar, with Mumbai Indians at the bottom of the IPL 2022 points table. However, Suryakumar Yadav has been in fine fettle. He was the player of the match in MI’s first win against Rajasthan Royals with 51 off 35 balls. In his debut match of the season, he smashed 52 off 36 balls against KKR before getting caught in the final over of the innings. However, he navigated the field with flair and found critical boundaries to lift Mumbai from a grave scenario.

Suryakumar played in a similar manner in their next game against Royal Challengers Bangalore (RCB) as well. This time, he hit an unbeaten 68 off 37 balls, slamming five fours and six sixes to help Mumbai reach 150 despite losing half their team for 79. The right-handed hitter scored 43 runs against Punjab and 37 runs against Lucknow. While MI’s performances have been dismal in IPL 2022, he has been one of the best finishers in IPL 2022 till now.

Andre Russell of the KKR has been outstanding towards the finish of the innings. He has easily cleared the field and hit several monster sixes, just what the franchise expected of him. But unfortunately, most of his efforts have gone fruitless as “Dre Russ” has had scant backup from the other middle and lower-order batsmen in his team. Nevertheless, the 33-year-old smashed a savage 70* in 31 balls, bludgeoning eight sixes, as Kolkata aced a chase of 138 against Punjab.

Russell scored an undefeated 49 off 25 balls against Hyderabad and 48 off 25 balls against the Gujarat Titans (GT). However, the West Indian batter was unlucky on both occasions, and Kolkata lost both games. SRH tracked down a target of 176 while GT defended a total of 156. Despite the losses, Russell has shone out with his extraordinary ability to identify the boundaries under pressure. Currently, he has twenty-two 6’s to his credit!

Shimron Hetmyer has been exceptional for RR at the end. It is claimed that figures don’t always tell the complete story. But in the instance of Hetmyer’s performance in IPL 2022, the figures reflect the degree of the southpaw’s domination. In seven games, he has scored 224 runs with a strike rate of 179.20. He has matched Buttler superbly, playing some remarkable cameos at the death.

The 25-year-old big-hitter got his season started with 32 off 13 balls against Hyderabad and hasn’t looked back since. He hit 35 off 14 balls against Mumbai, 42* off 31 balls against Bangalore, and an undefeated 59 off 36 balls against Lucknow Super Giants (LSG). In recent games, there have also been a couple of useful 20s. When Rajasthan snagged Hetmyer in the auction, they couldn’t have hoped for much more. His current batting average stands at 65, and that’s what gets him into our list of best finishers in the IPL this year.

Without a shadow of a doubt, RCB’s Dinesh Karthik has been under the most trying of conditions. Still, he has maintained excellent poise and game awareness. Even though Karthik has the expertise, some of his cameos have been mind-boggling. He has been RCB’s Buttler in terms of consistency, sans the hundreds.

Karthik smashed 44* off 23 against RR as RCB chased down 170. He warmed up with an unbeaten 32 off 14 against Punjab in a losing cause. Unfortunately, his 14-ball 34 against Chennai Super Kings (CSK) was in vain. Still, he followed it up with 66* off 34 as Delhi Capitals (DC) bowlers, particularly Mustafizur Rahman, were pummelling. Karthik has long been regarded as a strong finisher. Still, his consistency has been particularly impressive this season, which currently makes him one of the best finishers in the IPL.

Undoubtedly, one name leads all the rest, the legendary Mahendra Singh Dhoni. He’s closely followed by the incomparable AB de Villiers. Keiron Pollard, Andre Russell, and Hardik Pandya round of the best 5 finishers in IPL history.

We hope the info on the best finishers in cricket will help you gauge your online cricket betting odds well. If not, there’s always UWin Sports to help you with the best online cricketing odds, bonuses, and totally secure transactions. So install the UWin app today and enjoy sports betting wherever you are.