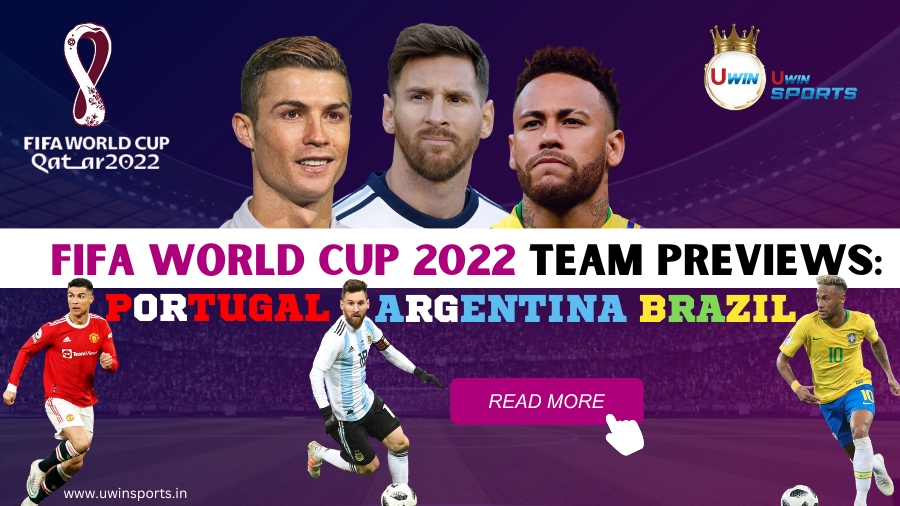 The grandest sporting event of it all is back, FIFA World Cup. The 2022 edition will be played in Qatar, where 32 nations will participate and compete for the coveted trophy. These 32 teams will be placed in 8 groups with each group having 4 teams. While there are many strong contenders to win the trophy, Brazil, Argentina, and Portugal are some of the names that come to our minds instantly.

Brazil has a great overall team, while people will root for Argentina and Portugal, as Messi and Ronaldo will most probably be playing their last world cup. Let us have a close look at these 3 teams, and evaluate their chances of winning the FIFA world cup 2022.

Brazil is the most successful team in football’s world cup history, winning the world cup a record 5 times. But it has now been over 20 years since Brazil has won a world cup. Thiago Silva will captain the Brazil side and look to take the team to world cup glory. The Brazil team looks much more balanced in this edition than the previous one, where the major dependency was on Neymar and Silva.

Brazil will depend heavily on Neymar to score goals; but they also have Jesus and Vinicius Junior who have been in tremendous form. Key figures such as Fabinho and Casemiro will be key in the mid field, while Dani Alves and Thiago Silva will be at the heart of defence. Alisson Becker will be a key player, as he is rated as one of best goalkeepers going around.

Let us have a look at the men who have been selected to represent the Brazil national side for the Football world cup 2022.

Brazil, Serbia, Switzerland, and Cameroon are all placed in Group G. While Brazil is expected to finish the group at top, nothing can be predicted, as teams such as Switzerland can stun any big team on a given day.

Also Read: FIFA World Cup 2022: Everything you need to know about the Qatar Tournament

Messi, the Argentina team captain and perhaps the greatest Football player ever, will have a huge set of expectations, as this might be his last chance to win a world cup. Players such as Angel Di Maria will have to play a crucial role along with Messi; only then Argentina will pose a real threat to the opponents.

Argentina could go with an aggressive style of play, given that they have players such as Paulo Dybala. The Messi-led side will most probably go with a 4-3-3 combination, and the attack of Di Maria, Messi, and Martinez could tear apart any defence if they sniff any weakness.

Let us have a look at the Argentinian side picked for the FIFA world cup 2022.

Argentina is placed in group C with Mexico, Poland, and Saudi Arabia being the other three teams. Argentina is expected to finish as the group leaders, while the other team to qualify could be Poland or Mexico.

Portugal’s national team is full of talented players, and any player is capable of changing the game in a matter of a few seconds. One of the greatest footballers ever, Cristiano Ronaldo is all set to play probably his last world cup.

There are players who can create chances, hold the opposition players, and score goals at will. With players such as Ronaldo, Rafael Leao, Ruben Dias, Bruno Fernandes, Portugal is expected to go deep into the competition.

Portugal supporters and Ronaldo fans around the globe will be hoping that the legend leaves the biggest stages of it all with a trophy against his name.

Let us have a look at the Portugal football team players who have been selected to represent the country at the mega sporting event, Football world cup 2022.

Portugal is placed in group H along with Ghana, South Korea, and Uruguay. Uruguay and Portugal are expected to advance to the next round, unless any big upset takes place.

If you are looking for an online football betting platform during the FIFA world cup, then what better place than Uwin, a platform that offers best betting bonuses. Uwin promotions are exciting and the Uwin platform is the best place to bet on football. Place bets, win real cash rewards, and withdraw smoothly.

Qatar will be hosting the FIFA world cup 2022.

Unfortunately and most probably, yes.