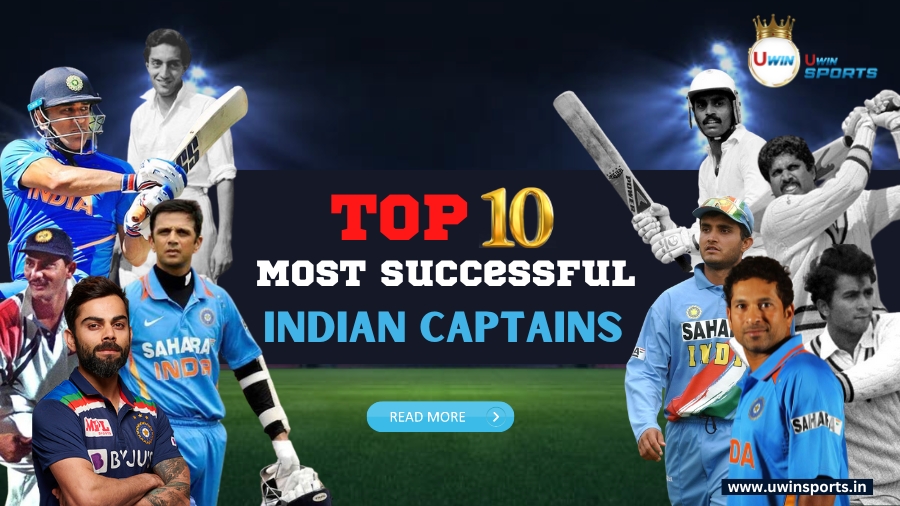 Captaining an Indian national team is a thing of honour, and very few people get this honour. There are captains in Indian cricket history who have excelled at their jobs and made the country proud at an international stage.

Each captain has a personality that somehow reflects in the way the entire team performs. Excluding the current all-format Indian captain Rohit Sharma, we have got a list of previous Indian captains who have brought the country glory with their leadership and top-class performances.

Virat Kohli has led team India with aggression and always believed that the team can win from any position. He instilled confidence in the team that they can win even while playing tests in away conditions. Although Kohli has no ICC trophy to show against his name as a captain, he surely made an impact as a captain, especially on foreign soil.

Kohli’s impressive win percentage of 63.38 speaks volumes of his leadership qualities. In ODIs, he has led India in 95 matches and won 65 out of those. With 39 test wins out of 66 tests, Virat remains the most successful Indian Test captain. In T20Is, Kohli has 30 wins out of the 50 matches that he has led.

What made Kohli’s stint impressive as a Test captain was that he took over captaincy from MS Dhoni in 2014 when the team was ranked 7th. At the time of Virat leaving test captaincy, India ranked at the top. Kohli could manage this because he always looked to win and even in foreign conditions he backed his bowlers to get 20 wickets. He has 20 Test centuries as a captain, only behind Graeme Smith who has 25 Test centuries as captain.

In ODIs, Virat Kohli is the 4th most successful Indian captain. He has led India in bilateral series wins in Australia, New Zealand, Sri Lanka, South Africa, West Indies, and Zimbabwe. When Kohli was captain, he stacked up 5449 ODI runs in just 91 innings at an amazing average of 72.65. He scored 21 ODI centuries as captain, and was only behind Ricky Ponting who has 22 ODI centuries as a captain.

In T20Is, Virat has led India to 30 wins in 50 matches, and has led India to bilateral T20I series wins in SENA countries. He has the record for scoring the fastest 1000 T20I runs as captain.

The man needs no introduction, as he is the only captain to win all three prestigious ICC trophies, ODI world cup, T20 WC, and Champions Trophy. With a win percentage of 53.61%, Dhoni stands 2nd in this list, but the impact he has had is second to none.

In Test cricket, Dhoni has led India to 27 wins in 60 matches. He is the second most successful Test captain of India. In 2009, India became the number one test side under the leadership of MS Dhoni.

Dhoni captained India in exactly 200 ODIs, out of which India won 110. He became only the second Indian captain to win an ODI world cup in 2011.

MSD is the best Indian captain in T20Is with 41 wins out of 72 matches. He became the first and remains the only Indian captain to win a T20 World Cup.

Sourav Ganguly was a fearless captain and believed in his players. He played with a lot of aggression and showed the team how to stand up in foreign conditions. Ganguly came close to winning an ODI world cup as a captain in 2003, when the team made it to the finals in South Africa.

In Test matches, Ganguly has won 21 matches, lost 13, and drawn 15, out of 49 Tests that he has captained. He is the only Indian captain to win a Test series in Pakistan.

In ODIs, India won 76 ODIs out of 146 ODIs under Ganguly. The best performance under Ganguly’s captainship came when the team made it to the World Cup final in 2003. He also managed to lead his team successfully to the Natwest Trophy glory in 2002. Ganguly has 11 ODI centuries as captain, and is the only captain to score 3 centuries in a single edition of World Cup (2003).

A calm and collective captain, Rahul Dravid led India in 104 matches, and ended up with an winning percentage of 48.07. He became the captain when there was a rift between Greg Chappel (Indian Men’s cricket team coach at that time) and Sourav Ganguly.

As an ODI captain, Rahul Dravid won 42 games out of 79. The lowest point in his ODI captaincy was the 2007 ODI world cup campaign, where team India was knocked out in the group stage.

In ODI cricket, Azharuddin won 90 matches out of 174 as captain. At the time of his retirement, he was the highest run-scorer in ODI cricket (9378 runs).

If you want valuable online cricket betting tips or are looking for some amazing online casino games, Uwin app and site is the place to be. Uwin bonus is best in the industry, and the platform is trusted. You can win amazing prizes and hefty rewards if you use your skills properly.

Virat Kohli, with 39 Test wins, is the most successful Indian captain in Tests.

Steve Waugh of Australia has an overall win percentage of 68.6, which makes him the most successful captain.