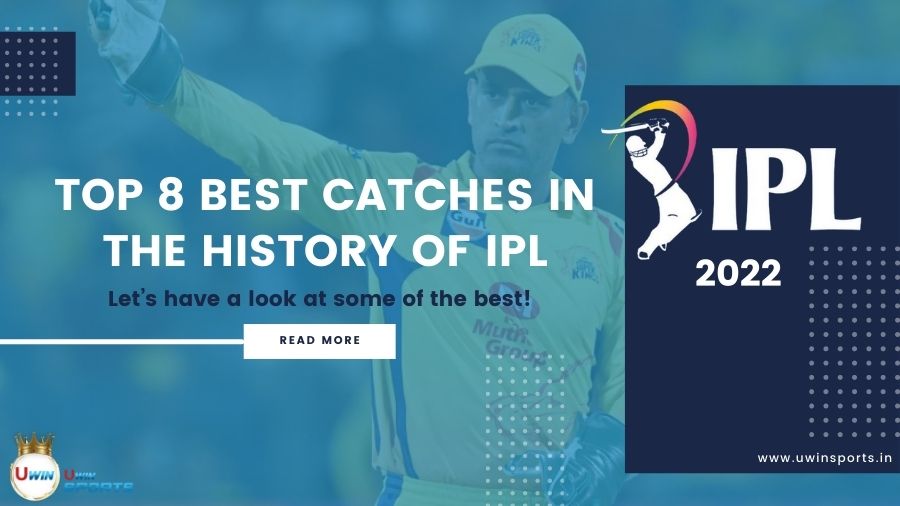 Top 8 best catches in the history of IPL

Like everyone on the field, cricket fans and IPL betting enthusiasts watch with bated breath as a catch happens. A catch or miss can make all the difference in the IPL. That’s why we decided it’s time for us to walk through the IPL archives and dig out the best catches in the history of IPL.

Our research came across some boundary stunners, incredible one-handed catches, and several high balls that required absolute stillness to catch. From its inception, the fielding standards for the IPL were set high. And now that IPL 2022 is on, the spotlight is again on brilliance in the field. As any cricket lover worth their salt knows- catches win matches. Not just that, some of the most spectacular ones remain etched in your memory forever! So, let’s have a look at some of the best!

Also, Read The Ultimate IPL Betting Guide: All You Need to Know

In the 2014 match between Kolkata Knight Riders and Royal Challengers Bangalore in Sharjah, the outcome was unclear until the very last ball. With AB de Villiers and Albie Morkel at the crease, RCB needed nine runs in the penultimate over. Only six runs were needed after the first three balls were singles, and ABD was on strike for the fourth delivery.

The final over was bowled by Vinay Kumar, who bowled a short delivery for his fourth of the over. ABD went for a massive shot towards the mid-wicket boundary. However, he could not strike the ball with the exact middle of his bat. The fielders on the boundary were in the game as soon as the ball was in the air.

Chris Lynn was only a fraction of an inch within the rope. He was perfectly positioned, and then his front foot slid. Despite slipping and nearly falling, he didn’t lose sight of the ball and kept his gaze fixed on it. While in the air, he caught the ball and somehow managed to land on his back, just centimetres from the line. KKR went on to win by two runs, and Lynn’s catch entered the hall of famous IPL catches.

Prithvi Shaw and Shikhar Dhawan, the Delhi Capitals‘ (DC) openers, seemed in command during the chase. But then things changed. Shaw’s lost his wicket to the combo of Khaleel Ahmed and Kane Williamson. He only managed to score 11 runs off eight deliveries.

Ahmed bowled outside off as Prithvi Shaw attempted but failed to draw the ball to deep midwicket instead of dragging it to mid-on. Kane Williamson, the SRH captain, dashed towards long-on and made a fantastic-looking catch! That too, while running backwards- not an easy thing to do, as anyone who’s ever played cricket will attest!

This was probably one of the highlights of the pandemic-afflicted, much delayed IPL 2020. MSD’s ‘gloves-off’ magic against Kolkata Knight Riders in Abu Dhabi might be a routine catch if you’re a stickler. Still, the CSK captain’s sheer commitment makes this one a treat to watch.

Before Dwayne Bravo’s delivery, Dhoni made a gesture to the bowler, probably indicating the lack of pace on offer. Bravo followed his captain’s advice and bowled a delivery on the off-stump and didn’t have a lot of velocity. When KKR’s Shivam Mavi attempted a heave on the on-side, all he got was a thick outside edge.

Dhoni dove full length to his right juggled it on the first attempt, and then sprung to his right to take the rebound.

The other unique thing about this catch is that with this Dhoni surpassed Dinesh Karthik as the IPL wicketkeeper with the most catches.

Hyderabad Sunrisers had set a target of 219 runs. RCB appeared to be the clear favourites until Hyderabad got off to a strong start because of Alex Hales.

Hales ran down the pitch in the ninth over of the chase and smacked one ball to the midwicket boundary. De Villiers, who had positioned himself close to the boundary’s edge, made a spectacular catch. De Villiers timed his jump well and snagged the ball that was definitely destined for a six as it was sailing over him.

But then the athletic South African caught the ball with his right hand while still in the air! He maintained his balance and landed inside the fence despite attempting the most outrageous jump.

In the 13th over, RCB reduced MI to five for 89 while chasing 186. Pollard was Mumbai’s last hope at the crease, and he lofted Daniel Vettori high to long-off. Mithun sought to balance himself beneath the ball inches from the boundary ropes.

The Mumbai Indians dug out behind him and cleared as they anticipated the ball landing near them. Mithun kept his balance and snatched the ball narrowly past the boundary with his right hand. He managed to grab and hold the skier with one hand, ensuring that he did not topple over.

Also, Read The Ultimate Champ: Who will win IPL 2022’s player of the season?

Kevon Cooper of the Rajasthan Royals believed he had enough to go long on, but Pollard had other ideas.

Pollard slipped to within a centimetre of the rope after snatching the ball out of the air with his right hand at full stretch before sending it back into play over his head.

Pollard nearly lost footing as he twisted around before rushing four steps towards the ball and diving for a one-handed capture. Cooper was eventually declared out after the third umpire checked the catch for a long time, confirming one of the best catches in IPL history.

Archer, who was stationed at third man, misunderstood the ball’s flight off Ishan Kishan‘s bat at first, sprinting several steps in front of the boundary. When Archer realized his error, he began to backtrack before leaping and extending his right hand.

Archer’s teammates were left scratching their heads in astonishment as the ball remained stuck. Jofra, on the other hand, appeared almost blasé as he trotted in to accept the applause of his jubilant teammates.

Also, Read Most Expensive Players In The 2022 IPL Auction

The majority of catches result from individual genius, so it’s a wonderful contrast when a stunner results from superb collaboration. Although Rahane took credit for the last catch, Royals teammate Johan Botha actually put in most of the effort.

Botha had the foresight to turn and toss the ball to Rahane, who was some distance away. He rushed towards the long-off boundary after catching the ball. Botha’s throw found Rahane in a good position, and the India international finished the dismissal with a simple catch.

Like these amazing fielders have got their teams covered, the UWin sports betting has you covered in IPL online betting, IPL match predictions, and the best IPL betting odds. With the UWin betting app, we’ve made IPL betting easier than ever. Download it today to enjoy cricket betting whenever, wherever. That’s not enough? That’s why UWin has the best IPL online betting daily deposit bonus and loyalty bonuses!