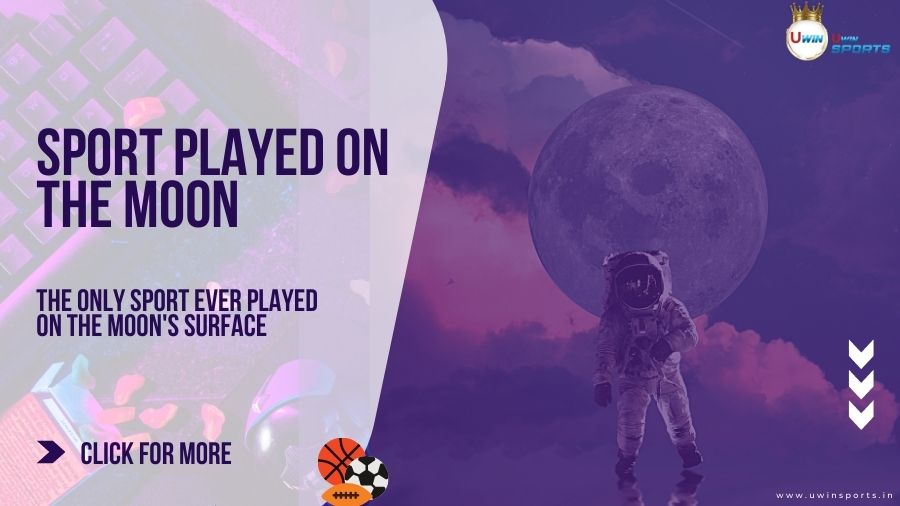 The only sport ever played on the moon’s surface

Can we ever play sports on the Moon? What a difference that would make! What would the difficulty be? Granted, a sports team on the moon is unlikely to ever exist. But, just for fun, how tough would it be to play sports under lunar gravity? Also, has anyone ever played any sports on the moon? Let’s find out as UWin takes sports out of our orbit and all the way to the moon!

What sport was played on the moon?

The sport that was played on the moon was golf. Alan Shepard, an Apollo 14 astronaut who was taken to the moon with two other crew members in 1971, attempted and succeeded in hitting a golf ball on the moon. We don’t know how far his ball travelled. Shepard says he saw the ball go “several miles away,” as caught on a camera that day.

However, the US Golf Association took the time to examine the arithmetic behind his stroke. Using data from the Apollo crew and more current moon mission telemetry, they determined that the first ball only went 22 metres, while the second ball only travelled 37 metres before halting.

In comparison, the typical amateur male golfer on Earth can hit a ball around 198 metres, while a female golfer can make the ball travel 135 metres. It’s one of those data that might come in handy if you’re preparing to bet on golf events on UWin

The game that was played on the moon

In Shepard’s defence, he had a few more challenges than an amateur golfer on a verdant lawn. To begin with, he was wearing the notoriously rigid spacesuit, which forced him to swing with one arm because putting his hands together for the traditional golf position was impossible.

Then there’s the matter of the customized golf club he used. It was also different from what the astronaut used on Earth, since it had the head connected to the end. Even yet, being able to play golf on the Moon in the 1970s was a great accomplishment for humanity.

And, with new moon missions scheduled in the near future using lighter, more versatile spacesuits, the next set of astronauts may be able to break Shepard’s record. They’ll most likely have far greater movement, but we’ll have to wait and see.

Where’s the golf club that Shephard used on the moon now?

Such a clear reminder of NASA’s moon landing in 1971 constituted an excellent prize for Shepard. He was permitted to retain the club until 1974 because the laws for permitting astronauts to keep space artefacts were different back then. He subsequently chose to gift it to the United States Golf Association Museum in Liberty Corner, New Jersey.

The moon club is, without a doubt, the most popular exhibit in the museum, and Shepard’s vision helped to make golf even more popular in the United States and across the world.

What sport would be the most difficult to play on the moon?

Football would be the hardest sport to master on the moon. Watching football greats like Lionel Messi move the ball along the field with only his feet is the most fascinating element of the game. Balls that just bounce and skip due to gravity on Earth would be unmanageable on the moon. Many shots, passes, and plays in soccer involve the ball becoming airborne in a very controlled manner. It would take some time for players to adjust to the moon’s low gravity.

What game would be best to play on the lunar landscape?

Basketball players would benefit the most if their game is played on the moon, since it is already a game of leaps and bounds. Players would be able to make incredible dunks on the moon without the constraints of earth’s gravity holding them down. Consider seeing LeBron James soar from mid-court to slam the ball, or Steph Curry shoot a full-court jump shot and nail it.

Life on the moon

As environmentalists call for immediate action to rescue our planet, some people are looking beyond Earth itself. Amazon founder Jeff Bezos has set his sights on the Moon, committing one of his other firms to launching space colonization efforts. Rapidly skyrocketing temperatures are melting the world’s ice sheets, resulting in more severe global climatic catastrophes. Heatwaves and storms will become more prevalent, hastening the melting of the world’s remaining ice sheets. This happened thousands of years ago, and raised sea levels by 30 feet (9.14 m); if it happened today, big cities such as New York and London may experience serious flooding.

The Moon’s South Pole features many ice reservoirs and a rather steady 0 °C temperature. While this appears to be extremely frigid, most other regions on the Moon range from 123 °C during the day to -190 °C at night. Due to the lack of atmosphere and weather, protection from solar radiation is also required, as are periodic meteor collisions, which cause 300 tonnes of water loss each year.

Any shelter would have to be constructed using available resources. Lunar regolith, or fine Moon dust, is similar to volcanic sand on Earth and may be converted into bricks using a process known as microwave sintering. This necessitates the use of intense sunlight or lasers to glue materials together, resulting in interlocking bricks that provide natural radiation shielding.

What would life on the moon really be like?

Every year, each individual consumes around 1,095 to 1,825 pounds (827.81 kg) of food, but we would require significantly more to sustain a nutritious diet on the Moon. Simply surviving on its surface consumes roughly 300 calories per hour, which is three times the rate of the Earth. We’d need much more energy to do daily two-and-a-half-hour exercises to maintain bone mass, muscular strength, and cardiac performance in the face of the Moon’s low gravity, which is around one-sixth that of Earth.

Growing food in the Moon’s atmosphere is likewise very difficult, though scientists are working on solutions. If all of the chemicals required to develop flora for nourishment were brought from Earth, human waste (including carbon dioxide from breath) might be used to replenish them for the next generation of plants. Although theoretically conceivable, we would need around 500 pounds (226.8 kg) of food per person, or the chemicals to create it from scratch, sent to the Moon in order for the cycle to begin.

Aside from perfecting this procedure, we’d have to prepare for the high-energy cosmic radiation that our food would be subjected to. A lunar greenhouse, which would lie subterranean, might be one answer. This would protect crops from damaging radiation while also using hydroponics to protect them from the hazardous compounds found in lunar soil. However, we would also require defence against this threat. Solar radiation might induce degenerative tissue damage, increased cancer risk, and central nervous system damage, making protective shields mandatory for all residents.

Comparatively, moon dust may not seem to be too scary, yet it is a major issue. Following their flights, all 12 Apollo astronauts had “lunar hay fever.” The moon dust irritated their eyes, nose, and lungs, but long-term exposure might damage their lungs and brain cells.

Forget sports on the moon, even life on the moon seems like a distant dream right now! So for now let’s be content with the numerous games that are played on earth and all the exciting sports betting that goes along with them. If you’re a passionate sports fan and wish to back your favourite players with online bets, Uwin always has the best ever sports betting odds and numerous betting markets. So, enjoy your favourite sport while winning big with a trustworthy sports bookmaker!